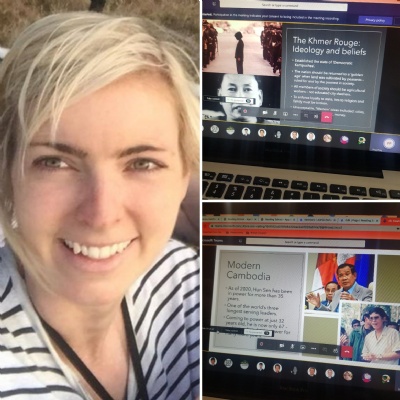 In 2014, she moved to Phnom Penh, Cambodia to work as a Strategic Communications Consultant for Cambodian for Resource Revenue Transparency (CRRT). She served there for a year before returning to Australia and earning a Masters in Public Policy.

Since 2017, Gen has worked as a PR and Advocacy Officer for the Society for the Protection of Animals Abroad (SPANA). She is currently a Media and PR Manager at Independent Age.

In her talk, Gen addressed the rise and fall of the Khmer Rouge regime, Cambodia’s years of brutality under the Marxist leader Pol Pot. She then discussed the Communist ideology and beliefs that underpinned the regime.

Ruilang Q (12SP) commented on the lecture, including his experience travelling through Cambodia:

“Focusing on the historical period from 1975 when the Khmer Rouge troops entered the capital of Cambodia, Ms Kennedy, aided by vivid photographs, narrated the years-long rule of terror by the Communist Party of Kampuchea, popularly known as the Khmer Rouge. She recounted some appalling atrocities of this tyrannical regime, including forced marriages and the recruitment of child soldiers.

Most abominable of all, the Party executed people – “often hand to hand – en masse” for having an education, wearing glasses, or even “no reason at all”. Shocking to us all, the Khmer Rouge killed at least 1.7 to 2 million people, which was nearly a quarter of the population by the time Vietnamese troops captured the city in 1979. Amongst the victims, intellectuals, professionals, and “non-conformists” were especially targeted: only 50 of the country’s previous 1500 doctors survived the Khmer Rouge.”

“Particularly beneficial to economics students like myself, Ms Kennedy gave a thorough insight into the corruption in Cambodia. She introduced us to a specific way that the government officials profit from abusing power: collecting “tea money”. Individuals and firms would pay, sometimes a vast sum, to "smooth the paths for deals with the government". I recall paying “tea money” to the customs officers when my family drove through Cambodia to Thailand. At the time, it was just $10 per person at the border: we were told to tack the banknotes discreetly in our passports and hand them in for stamps. When the passports came back, the dollars would’ve been gone and we would have got our permission to enter or leave the country.

On a macro scale, the costs of corruption to this poor country are perilously high; given that Cambodia’s GDP was at one point 50% of oil and gas extraction. Ms Kennedy pointed out that improper payments worth of millions such as the US$2.5m paid by BHP (a leading global resources company) went straight into government officials’ wallets, instead of being spent on infrastructures such as schools and hospitals as promised. It is excruciating for the citizens to see their government failing to correct market failure. The single-party controlled state has consistently failed to allocate scarce resources in the public interest. As a result, around 18-19% of the foreign-aid-reliant, heavily-dependent-on-primary-sector country’s population are still living in extreme poverty.

Ms Kennedy also presented the 1993 election, the unprecedented administration of the UN Transitional Authority and the present-day dictatorship in the country in her perceptive lecture.”

The lecture was well attended, with over 100 people tuning in, finishing with a short Q&A.

Thank you to Miss A Cash (Teacher of Economics) for organising this lecture.

Thank you to all the parents and alumni who have completed the form to share your professional expertise, academic specialism or research background with our students through a short talk, master class, tutorial or inspire lecture. Please bear with us as we work through our list and make contact with you to arrange dates and times for future talks.

If you are able to assist please complete the form here: Remote Inspire Lectures