All Year 13 Biologists took part in the 2018 British Biology Olympiad, run by the Royal Society of Biology, where approximately 7500 pupils competed with schools around the country.

We are also delighted to announce that Chris Youssef, Thomas Jia, Joshua Blake and Cameron Hillman are all through to the second round of the Olympiad and we congratulate them on this success, being in the top seven percent of candidates who gained a Gold Award.  The competition is highly regarded and all our pupils have excelled yet again achieving, Gold, Silver and Bronze Awards.

The British Biology Olympiad challenges and stimulates students with an interest in biology to expand and extend their talents. It enables students to demonstrate their knowledge and to be suitably rewarded with publicly recognised certificates and medals.  The competition consists of two, 45-minute online multiple choice papers.  Top scoring students will be offered the opportunity to attend an award ceremony in London.  In addition to encouraging and rewarding pupils in their studies, the British Biology Olympiad is the first stage in selecting a team to represent the UK at the International Biology Olympiad (IBO) this year being held in Tehran, with over sixty countries taking part. The IBO seeks to challenge by both theory and practical tests some of the top pre-university biology students in the world, with over sixty countries taking part. The UK teams have had considerable success at IBO and we are very grateful to BBSRC for its continued support of the UK team's participation.

Last year, our very own, William Chadwick (OR 2010-2017), was chosen as one of the four finalists to represent the UK at the International Biology Olympiad alongside pupils from St Paul's Girls' School, The Perse School and Wellington College.

The UK team competed against students from over 60 other countries, taking part in theoretical and practical tasks and challenges designed to test their biosciences acumen and stretch their understanding of the subject to the limit when it took place for the first time in the UK at the University of Warwick. 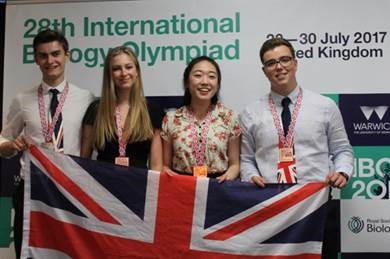 We hope that we follow a similar outcome this year.