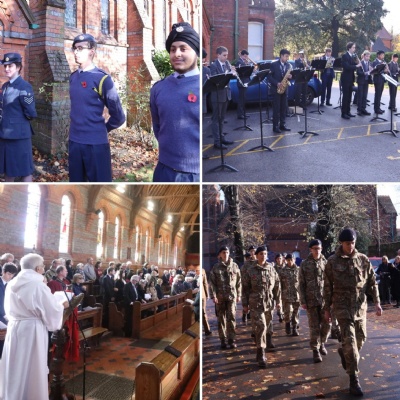 On Sunday 10th November, over 150 guests accompanied the Headmaster in commemorating the 101st anniversary of the signing of the Armistice. In attendance, a mix of pupils, parents and alumni paid their respects to the countless men and women, who sacrificed themselves during the First World War.

Commencing the service, the Reading School and Kendrick School CCF marched along the school terrace and into the chapel, complemented by the playing of the Reading School Concert band. Here, the Honorary Chaplain, Revd. Clive Windebank (OR 1952-59), greeted those present, also introducing the service. This was followed by the hymn ‘All people that on earth do dwell’ and a brief prayer.

Subsequently, the President of the Old Redingensians Association, Ian McKinnon (OR 1977-82), read a few biblical verses highlighting the significance of remembrance within the Christian faith, in particular referencing its importance in the ‘Parable of the Prodigal Son’.

When the clock struck 11, the service paused as the whole country collectively marked this sombre occasion with a two minute silence. John S (12W) delivered a beautiful performance of ‘The Last Post’, following which the silence was observed, until the end was signalled by the playing of ‘Reveille’.

Archivist and Old Redingensian, Ken Brown (OR 1955-63), then continued the service when he provided a unique insight into the Kendrick Boys and Reading School students who passed away a century ago, honouring their sheer selflessness in defending the nation. Those mentioned had either passed away as a result of wounds sustained during conflict on the Western front, or were killed in fighting over other disputes around Asia (Ken Brown would be more than happy to supply additional information if interested and can be contacted through this link).

Paying tribute to said students, the CCF laid three wreaths on three separate memorials in the Chapel: the Kendrick War Memorial, the 1914-18 War Memorial and the 1939-45 War Memorial.

Following this poignant gesture, our school Chaplain, G D Cornelissen, discussed a philosophical outlook regarding the idea of remembrance, providing an intriguing perspective on the matter.

Finally, Mr J Tunstill, Director of Music, conducted the Reading School Chapel Choir, as they supplied the service with a memorable conclusion through their graceful rendition of ‘In Pace’ by John Blitheman.

The congregation then relocated to the refectory, where old boys, parents and students alike enjoyed refreshments as the event wrapped up.

“The remembrance service on Sunday was one I shall not forget. The chapel choir was fantastic, the CCF was well drilled and the weather was great. It was a coming together of the Reading School community with staff, ORs, parents, boys, and wider friends of Reading School in attendance. More importantly, however, it was a moment of deep thought.  The stories of the Old Redingensians who had died one hundred years ago, some at an age not far from mine, really brought the act of remembrance close to home for me. The message that most resounded with me was that the long list of names of those who gave their lives in the Great War had all sat in the same seats in the same chapel we were seated in. I truly felt proud to be a Redingensian and shall never forget all those from our school who made the ultimate sacrifice.”

A special thanks to those who aided in the organisation and execution of the event: Headmaster A M Robson, Honorary Chaplain, Revd. Clive Windebank (OR 1952-59); President of the Old Redingensians Association, Ian McKinnon (OR 1977-82); John S (12W), Archivist and Old Redingensian, Ken Brown (OR 1955-63); the Reading School and Kendrick School CCF led by Capt. David Morris; Mr G D Cornelissen, Reading School Chaplain and Head of Religious Studies; the Reading School Chapel Choir and Concert Band conducted by Director of Music, J Tunstill.