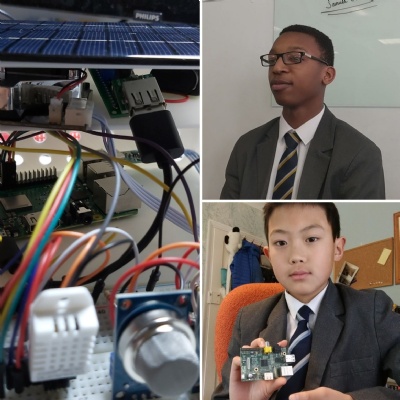 First launched by PA Consulting in 2012, this competition sees schools across the UK use a small computer made by the Raspberry Pi Foundation to design innovative solutions for the modern world. It aims to promote the teaching of computer science skills in schools and stimulate interest in the IT industry. Entry is free and open to all schools and colleges in the UK.

Samuel A (9W) shares his experience:

“Ryan and I entered the Raspberry Pi STEM competition run by the consulting company, PA Consulting. The goal of the competition was to use a raspberry pi, a credit card sized computer, to create innovative solutions to real-world challenges.

Our project was an IoT device that collects sensor data like temperature and humidity, pollution levels, and certain gasses in the air and then you can then see that live data on your phone. The Internet of Things, or IoT, refers to the billions of physical devices around the world that are now connected to the Internet, all collecting and sharing data.

This project was inspired by the world’s rising pollution levels and the effects of climate change. Citizens of a city with these sensor boxes can physically see the effect climate change has on the city and the amount of pollution in the city. This data can also be used for medical reasons. For example, if you have a Sat Nav, then you can take the less polluted route to your destination or if you have underlining health conditions, you can be emailed if the pollution is too high for you to go out that day.

We believe that the data this project has collected could inspire people to act to reduce the effects of climate change and reduce their pollution by switching to electric cars or other alternatives. We spent many months on this project and our hard work paid off.

We were entered into the finals, meaning we were in the top 3 of projects in our category. This has been an amazing experience and I would like to thank Mr. S Ling and the rest of the computer science department for their support.”

“Our project was a weather sensor, and we had various sensors enclosed in a 3d printed box. They could monitor air quality, humidity, fine particles and more. The data could link to your phone and be accessed from there.

As Samuel explained, IoT refers to the world being connected by billions of devices worldwide, and the rising pollution levels and global warming inspired our project. The idea for the project was that, when commercialised, it could be used by the public to recognise areas and routes with potentially dangerous, and unsafe pollution zones, and vice versa.

As the competition theme was also sustainability, so we attached a solar panel power circuit to run the whole project, contained in a 3d printed shell. We worked for around 4 months, and seeing that we have been put into the finals are amazing, as our hard work has paid off, and we are in the top 3 projects of our age category, year 7 to 9.

Overall, the experience has been smooth, with little bumps. I would like to give special thanks to Mr Ling and Mr Barraclough, for their advice, help, and guidance for our project, along with everyone in the computer science department and Reading School.”

Mr S Ling-Winston (Head of Computer Science) praised the pair for their commitment:

“The students have worked completely independently on this project and their commitment to turning up during many lunchtimes, as well as working in their free time has reaped the reward of making it into the finals.

The feedback from the first round of judging was that they had a great submission with lots of detail in pictures, diagrams and video demos. It is a complete working prototype, with several sensors and a case (which they 3D printed) for when it is deployed. All the source code has been documented and the team's knowledge and understanding were evident in their video presentations.”

Congratulations to Samuel A (9W) and Ryan L (8L) for gaining a place in the finals.

We are looking forward to hearing back from the judges in May 2020. We hope for even more success in the future.